California Oregon Power Company v. Beaver Portland Cement Company doesn't involve the Clean Water Act, as it was decided almost 40 years before the act was adopted in ints substantially modern form. It does, however have a great deal to do with water use in the United States, including vastly important issues spanning water quality, mining, agriculture and municipal water supplies. Ever wonder why they needed all those orange orchards in Chinatown? Because California Oregon Power Company officially severed water rights from real property rights and freed western states to appropriate water in rivers to senior permittees

The Rogue River is a non-navigable river in southern Oregon. California Oregon Power was a power company that owned land on the east side of the river in Gold Hill, Oregon, home of the Oregon Vortex & House of Mystery (the reader's guess is as good as the author's). Their title originated from a grant from the federal government under one of the Homestead Acts.They built the Gold Ray Dam and used the river's flow to generate electricity, which must still have been pretty novel at the time. None of California Oregon Power’s predecessors ever diverted the river’s waters from the channel in order to apply them to a beneficial use.

Beaver Portland Cement (Portland Cement has nothing to do with Portland, Oregon - a fact your author learned distressingly late in life, despite going to law school in Portland, Oregon and reading this case there) bought some land from Gold Hill on the west side of the river, across the way for California Oregon Power. Beaver obtained water rights from the state engineer. Their plan was to blast the river to free the channel and acquire aggregate to build their own dam. Beaver’s operations would ruin California Oregon Power’s business.
California Oregon believed they have a right to the river’s unimpeded flow as a riparian owner under the common law natural flow doctrine. Beaver, however, believed they had the right to divert the river’s water because of their adjudicated water right under Oregon state law. Did California Oregon receive the right to unimpeded flow under the Homestead Acts, or can Oregon statutes grant consumptive water rights to permitted users?

Generally speaking, the United States has two ways of determining who gets to use water, how much and where.

The United States inherited common law water regulatory principles from Britain. There, waterways were used for drinking, navigation, fishing, watering livestock and powering mills; consequently, English law prioritized those uses. The public trust doctrine ensured public rights to boat and fish. As for drinking, watering livestock and powering mills, courts determined that riparian property owners, those lucky folks who owned real property that abutted waterbodies, could use as much water for domestic purposes as they wanted, and could otherwise use water to the extent that it didn’t diminish the flow enjoyed by other riparian property owners. This worked great in Britain, where fairly wet weather meant that irrigation wasn’t necessary to grow food, and it worked quite well in the original thirteen colonies where that was also true.

Once the United States began to expand westward, settlers found that while the west has many very grand rivers, a lot of land west of the Mississippi was arid to the point of being useless for agriculture without irrigation. Old-timey miners similarly often needed water far away from where it was naturally located. Even if you could divert water from riparian property you owned, water used in mining and irrigation is consumed, meaning that return flow - if any - would be far less that was removed, as water was metabolized by plants, evaporated, sank into the ground or ran off into a different watershed than from where it was removed.

Folks in Colorado especially, but increasingly throughout western states, came up with a new way of adjudicating water rights, that became known as Prior Appropriation doctrine. Prior Appropriation divorced water rights from riparian property ownership. To perfect a water right, you had to do three things: (1) demonstrate your intent to use water (2) actually divert the water from the waterbody and (3) put the water to a beneficial use. Once this was established, the appropriator was entitled to that amount of water in perpetuity - so long as she continued to use it. Where disputes arose, the doctrine follows a-first-in-time-first-in-right rule, and there is no sharing: Senior water users get to use their entire allotment before junior users get anything; if there is any water left when the first guy is done, the next most senior user gets her whole allotment and so on until everyone is satisfied or there is no water left. If your way of using water doesn’t actually divert the water - too bad, so sad! you have no legal protections under classic prior appropriation.

The question with which we are here primarily concerned is whether, in the light of pertinent history, of the conditions which existed in the arid and semiarid land states, of the practice and attitude of the federal government, and of the congressional legislation prior to 1885, the homestead patent in question carried with it as part of the granted estate the common law rights which attach to riparian proprietorship. (295 U.S. 153-154)

Justice Sutherland writes for at length, often quite floridly, about the history of and necessity for prior appropriation water law in much of the west. I mean, this is some Cormac McCarthy right here:

In the beginning, the task of reclaiming this area was left to the unaided efforts of the people who found their way by painful effort to its inhospitable solitudes. These western pioneers, emulating the spirit of so many others who had gone before them in similar ventures, faced the difficult problem of wresting a living and creating homes from the raw elements about them, and threw down the gage of battle to the forces of nature. With imperfect tools, they built dams, excavated canals, constructed ditches, plowed and cultivated the soil, and transformed dry and desolate lands into green fields and leafy orchards. (295 U.S. 156-157)

Oregon’s court water rights decisions before the 1909 State Water Code was adopted were inconsistent, but the code itself opened all the state’s water to appropriation for a beneficial use except for where appropriation would impair a vested right. Is Oregon California’s use of the free flowing rogue a vested right?

The heart of the decision lies in Justice Sutherland’s analysis of various public lands divestment laws and how they show a federal intention to adhere to local rules. The Act of 1866 acknowledges and confirms local customs, laws and court decisions concerning ditch and canal construction. The Act of 1870 confirms that patents granted and homesteads allowed are subject to vested and accrued water rights. Most explicitly, the Desert Land Act states that water rights in California, Oregon, Nevada, Colorado, Washington, Idaho, Montana, Utah, Wyoming, Arizona, New Mexico, North Dakota and South Dakota depend upon bona fide appropriation, and that waters not at that time appropriated remain open for future appropriation for irrigation, mining and manufacturing.

The streams and other sources of supply from which this water must come was separated from one another by wide stretches of parched and barren land which never could be made to produce agricultural crops except by the transmission of water for long distances and its entire consumption in the processes of irrigation. Necessarily, that involved the complete subordination of the common law doctrine of riparian rights to that of appropriation. And this substitution of the rule of appropriation for that of the common law was to have momentous consequences. It became the determining factor in the long struggle to expunge from our vocabulary the legend "Great American Desert," which was spread in large letters across the face of the old maps of the far west. (295 U.S. 157-158)


The Court found congress intended to completely replace riparian property rights with prior appropriation water rights on public lands conveyed to private ownership in order to promote land development and the reclamation. Congress intended to sever water rights from their common law connection to real property, and all the land it conveyed to private ownership came without riparian rights. Sutherland looked at many other supreme court water law cases and saw nothing conflicting with this determination. Since the federal government owned the public domain, it could dispose of land and water together or separately; the homestead acts and the desert lands act showed a clear intent that land would be patented separately, and that the water rights would remain free for public appropriation as determined by state rules and customs.
California Oregon Power Company v. Beaver Portland Cement Company dam Great American Desert natural flow prior appropriation riparian Rogue River Water law Wild & Scenic River

INTRODUCING CLEAN WATER ACT CASES A picture of the Cuyahoga River Fire, sourced from Cleveland Historical, accessed at https://clevelandhistorical.org/items/show/63 on March 16, 2018  In CWACases I'm going to read some Clean Water Act cases (and sometimes some cases that aren't Clean Water Act cases but I think are important anyway), link to the cases, and then explain the key points as clearly and simply as possible. I'm going to try to make the posts short, Aiming for a 1500 word limit (excluding quotations!!), and hopefully provide readers with a helpful resource to understand and reference important Clean Water Act cases. I'm going to remove internal quotations, internal citations and I'm not going to pinpoint cite the case I'm writing about. If you're using CWACases for legal research, you'll get an idea about what the case is about and why its important, but it's not meant to be a replacement for reading the case yourself! Partly I

Milwaukee Combined Sewer Outlet at Becher, photographed in 1931. The original can be found at Urban Milwaukee in their story " How The Sewerage District Came of Age " City of Milwaukee v. Illinois 451 U.S. 304 (1981) Illinois v. Milwaukee was decided months before the modern Clean Water Act was adopted in 1972. The rematch, City of Milwaukee v. Illinois was decided in 1981 - could Illinois still rely on its federal common law nuisance claims against Milwaukee despite the massive new federal regulatory program? The Facts Milwaukee has a lot of sewers that discharge into Lake Michigan not too far from the Illinois border. Milwaukee has some sewers that are separated - there are pipes for rain water and pipes for poop-sewage - and some that are combined - there’s one set of pipes for both rain water and poop sewage. Both sewers are susceptible to overflowing - being purposefully re-routed to empty directly into Lake Michigan - but combined sewers are esp 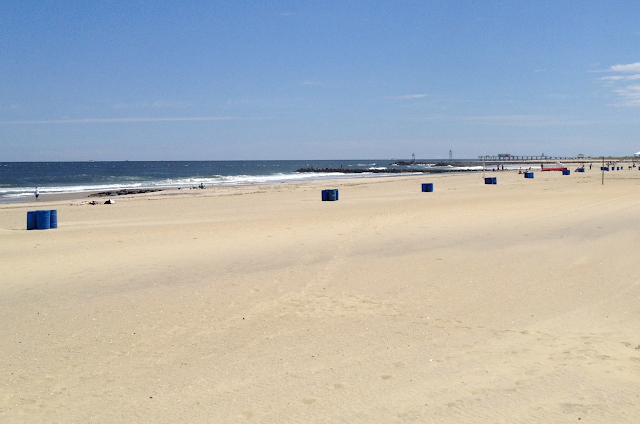 Avon-by-the-Sea's beach as shown at bestinbeach.com , photo credited to Lisa Dworkin, who rates Avon-by-the-Sea's beach as four out of five chaise lounges Borough of Neptune City v. Borough of Avon-by-the-Sea ,  61 N.J. 296 (1972) Before We Begin, Why We Care About Access Continuing our run of belying our mandate,  Borough of Neptune City v. Borough of Avon-by-the-Sea ALSO doesn't involve the Clean Water Act, so what are we doing here? Clean Water Act Cases is proudly now associated with the Clean Water Advocacy Center , a non-profit environmental public interest law firm headquartered in Montclair, New Jersey.  As it says in the logo header, CWAC advocates for strong, healthy waterways, and we do that by providing legal services to everyday folks with water quality, quantity or access issues. That means that we fight for water quality (primarily, through the Clean Water Act and other state and federal statutes), for water supply (whether in riparian jur